In 1819, Spain agreed to cede Florida to the United States with the signing of the Adams–Onís Treaty. The official transfer taking place in 1821.

Under Spanish rule, Florida was divided by the natural separation of the Suwanee River into West Florida and East Florida. 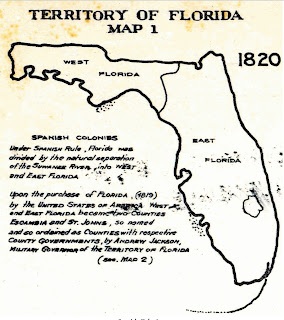 Upon the receiving of Florida, by the United States of America, West Florida and East Florida became two counties: Escambia County and St Johns County, each named for Florida rivers. 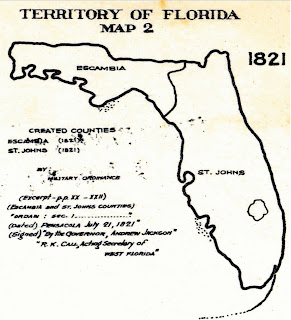 The Territory of Florida was an organized incorporated territory of the United States that existed from March 30, 1822, until March 3, 1845, when it was admitted into the Union as the state of Florida and officially became our 27th state.

According to the terms of the 1823 Treaty of Moultrie Creek, between the United States and Seminole Nation, the Seminoles were removed from Northern Florida to a reservation in the center of the Florida peninsula.
Much of the land for this first Seminole reservation was located in modern day Lake County.

The United States began building forts and trading posts throughout the Gulf coast and the East coast, then known as Mosquito County, in order to enforce the treaty and defend the settlers against the Seminoles.
This new United States territory offered an invitation for more white settlers to come South.

Many of our ancestors came to this area from South Carolina and Georgia. Since there were no established roads, the pioneers traveled by horseback or wagon over the previiously established Native trails.

At the time, Florida had three land offices, one of which was located in Newnansville (near present day Gainesville).
The pioneers migrating to this area could acquire land through:
Acts of Congress,
U. S. Land Patents,
payments for military service (if they could prove they had fought in any wars up until that time),
or private purchase made directly through the government or through an individual land owner.