In the early 1920s, before integration, Albert Blue walked nearly 28 miles from his home in Groveland to Tavares in order to petition the school board to build a school for this area's African-American children. Blue pledged $50 of his own money towards its construction.

A large wooden school for Groveland's African-American students was built off S.R. South 33 near Mills Avenue. This building had three rooms, two rooms on the first floor and one room on the second floor. It was available for students grades 1-8.

Near the early 1940s, a man by the name of Doc Jones bought a bus and, with help from the school board, transported the older students from Groveland, Stuckey, and Clermont to Eustis Vocational High School.
In the 1950s, the students were bussed to Carver Heights in Leesburg.
In the 1960s, the school board paid for their transportation to Lincoln Park High School in Clermont.

Sometime before 1961, the tall wooden building, known as Edgewood School, was eventually moved across the road where it was used as a neighborhood center, providing clothing, food stamps, and food commodities for qualified families.
After this wooden two-story building was moved, it was replaced with a new concrete block building consisting of four classrooms for grades 1-6.

This school was closed in 1961 as a new third school was built on Parkwood Avenue (at todays's Groveland Elementary), with six classrooms, an administrative suite, and a lunchroom and it was named Edgewood Elementary.

James Wyche served as principal at all of the schools named Edgewood in Groveland beginning as teaching principal at the two-story wooden schoolhouse in 1949, and concluding as building principal of the Groveland High School Edgewood Vocational Annex in 1978. 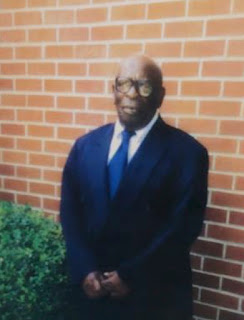 Mr. Wyche also taught 4th-6th grade while his wife, Flossie, taught 1st-3rd.    This dedicated couple provided gifts at Christmas for the children which they paid for from their own salary.

The original Edgewood wooden building, built in 1920, was falling into disrepair, it was destroyed with a "controlled burn" in September 2003.
Parts of the original wooden Edgewood School are on display in the museum.
The heart pine wood came from the Arnold Sawmill in Groveland.
The door and an original window and sideboards were presented to the Groveland Historical Museum by a former Edgewood School student and City Council Member Johnny Griffin.

In 2007, the second Edgewood Elementary building was converted into the Groveland Senior Center and was named to honor James Wyche, an outstanding and beloved educator.


Next Article: 1922 - The City of Groveland Becomes Incorporated