1918 - Groveland's Third School is the Best of the Best

With the influx of many Northerners coming to join the original settlers, along with the success of the Arnold Sawmill, which was luring large numbers of new residents to this area, there was an urgent need for a larger school.
This third school was built on Cherry Street (just west of the present day Gray Middle School) around 1918-1919.
It was a two story yellow brick school. 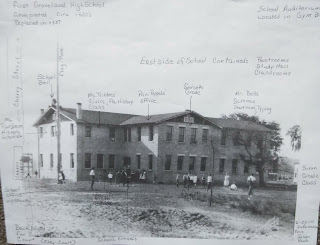 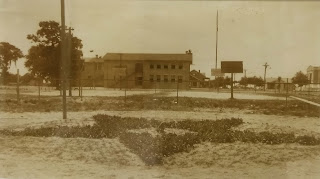 The students from the previous school, which was located in the Greenwood Cemetery area, were now moved into this new building.
The previous school had only taught students up to grade 8, so grades 9-12 were added in the new school.
J. Ray Arnold, wanting the best educators available for the children of Groveland, went to the president of the University of Florida to get a recommendation for a principal. He recommended Lacy Thomas, who became the first principal in 1921. J. Ray Arnold made sure that only the best educators were accepted. It was well known that the faculty of Groveland High School were the most academically qualified in the entire State of Florida. Mr. Arnold also built a "Teacherage" on Magnolia Street, which was a boarding house for the teachers. He even paid the teachers when state money was unavailable.

The students excelled in their achievements. The first graduation took place on May 12, 1922.
The students receiving diplomas were:
Uhland McKinney
Clyde Plowden
Lyda Smith
Katie Stewart

Legend has it that, in 1924, J. Ray Arnold suggested the name of the school's mascot. He chose the Groveland Greenbacks, because "There's nothing stronger than the U. S. greenback". Greenback is a term for the American dollar bill.


Carlos Jones was a long-time bus driver for GHS. He is pictured here in front of a 1923 Dodge school bus. The side curtains would be loewered in case of rain. 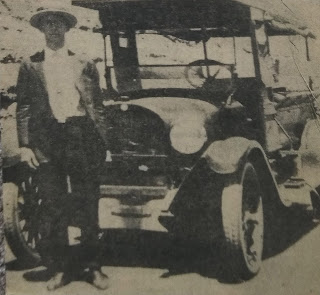 With the increase in size and the high caliber of teachers, Groveland became the go-to school in the area. Many of the schools from the surrounding settlements began closing and merging with Mascotte and Groveland schools.

The Carter's Island School closed around 1922. The students were transferred to Mascotte School.

The Tuscanooga School closed in 1923. The students were transferred to Mascotte School.

In the mid to late 1920s, the students in higher grades from the Mascotte School were consolidated with Groveland. Later, the students were sent to Groveland upon entering the 7th grade.

The Withlacoochee School in Eva was closed around 1941 when students were sent to Groveland.

The Bay Lake School stayed in operation until 1952, at which point the students were bussed to Mascotte or Groveland schools.

Fitness was also important to J. Ray Arnold, not only for himself (he had a private fitness center and bowling lane behind his house), but for the children as well.
By 1923, Groveland had the only indoor gymnasium in Lake County, with an auditorium, two classrooms, large stage with elegant red velvet curtains, indoor basketball court, and dressing rooms. 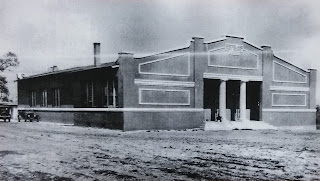 The school boasted of an outstanding athletic field in the 1920s and 1930s.
It was here that Groveland High School's 1926 State Soccer Champions were trained. Unbeatable, our team of local boys even beat the University of Florida's team as well as Jacksonville's Duval High School and many other large schools.
In 1925, high school student, Camille Beach, won the "Oratorical Contest" for the State of Florida.
In 1925-26, the Lake County Swim meets were held at Lake Audrey with Groveland winning the greatest number of points.
In the early 1930s, Groveland High School had the only school orchestra in the area.
Regular school assemblies provided students with lectures on the building of character, patriotism, becoming good citizens, and giving back to the community.

By around 1936, the school building was already condemned and torn down.
Classes were held in churches and other places, like the Lake David Community Center, while the new 1937 school was being built.