A History of Nearby Okahumpka and Bugg Spring

Okahumpka was an important place to the local Native American tribes. The name is believed to be a combination of the Hitchiti "oki," meaning water, and the Creek "hamken," meaning one, or, freely translated, "single lake." It was also the name of a tribal town of some importance in the Sumter County area, which was home to Chief Mico-an-opa (Micanopy). 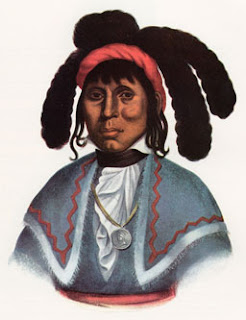 Today a lake in Sumter County and the town north of Mascotte bear the name of Okahumpka. Alternate spellings were: Okahumky and Okahumkee.

In 1823, at the Treaty of Moultie Creek, the Seminoles were ordered to live in a reservation, much of which was located in modern day Lake County.
One large tribal camp was located about five miles northwest of present day Groveland in the area of Tuscanooga. The area was named after their leader, Halpatter Tustenugee. Records indicate there were somewhere between 180 to 300 members of the tribe living there. Tustenugee led his warriors to participate in what became known as the Dade Battle, which took place in Bushnell.
Other nearby tribal camps were located at Okahumpka and northwest of Center Hill. It is likely that these groups also took part in the battle.

A magnificent spring on the edge of Okahumpka holds a unique place in Florida history. The spring is quite remarkable and the grounds surrounding it hold great historical significance. According to the St. Johns River Water Management District, Bugg Spring is a second magnitude spring that is 170-175 feet deep. Clear and cold, the water has been a focal point of life in the area for many years. The waters from the spring flow north into both Lake Denham and Lake Harris. 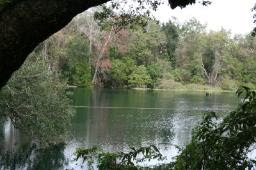 The archaeologist Clarence B. Moore "investigated" (a.k.a. destroyed) the Native American mounds at Bugg Spring, which showed evidence that Native Americans had used the spring for thousands of years.
Although the exact site is debated, the spring is one of the sites in the vicinity believed to be a possible location of the Seminole Indian town of Okahumpka. This important town was the scene of much planning during the days leading up to the Second Seminole War and warriors from here, along with those living in Tuscanooga, took part in Dade's Battle in nearby Bushnell, Florida.

After The War Between the States, Bugg Spring became the home of the noted Confederate officer, John Jackson Dickison. 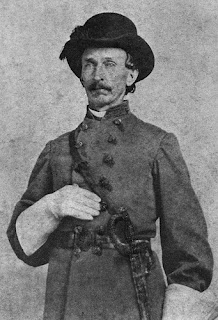 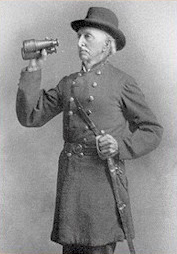 He was called the "Swamp Fox of the Confederacy" because of the similarity of his tactics to the famed Southern officer of the American Revolution, Francis Marion. Dickison was a captain for most of the war, although he often commanded battalion size units. He was a terror to Union forces in East and Central Florida.
The "Swamp Fox" struck when and where attacks were least expected and achieved solid results for the Confederate war effort. One of his most dramatic hauls was the Union steamboat Columbine that Dickison ambushed with artillery on the St. Johns River. Among his prisoners was Maj. Gen. J.G. Foster.
Although he was promoted to colonel at the end of the war, Dickison did not receive the news until after he gave his parole. He later served as a general in the state service.

During their years living at Bugg Spring, his wife, Mary Dickison wrote a sentimental biography of her husband that she titled Dickison and His Men. It is one of the best known books on the role of Florida in the war and includes many first hand observations of Dickison and the men who served with him.

Bugg Spring is currently privately owned and is not open to the public, because it is leased by the U.S. Navy which conducts acoustic research on the site.